Everything You Need to Know about Dobby Weave

The dobby weave is a highly unique and beautiful weave. It gives rise to a textured bumpy geometric print fabric useful for making dresses, blouses, suits and the like.

So, today weaving machine manufacturers Golden Elegance explains to you what is the dobby weave and what are its properties.

Weaving is the process by which fabric is made, either with the help of hand-powered looms or power-operated ones. There are three basic weaves. They are twill, plain, and satin. Furthermore, there are other fancy weaves such as Jacquard, Leno, dobby, and pile.

What is a Dobby Weave?

A dobby weave makes use of a special piece of equipment called a Dobby that is attached to the loom when creating the fabric. This equipment helps to incorporate small geometric prints into the fabric. The designs of a Dobby weave are much more simple in comparison to the Jacquard weave.

Fabrics produced by the Dobby weave usually are made by two coloured threads so that the patterns and designs are noticeable. The alternative to Dobby weaving is printing the design onto the cloth. Dobby weave can be used in silk, nylon, cotton, wool and other fibres making it extremely useful for creating a variety of blends. 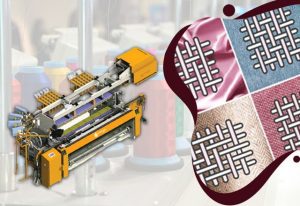 When Was the Dobby Weave Invented?

The dobby weave has been around for around 200 years and the dobby part was added to the loom in 1840.

What Are the Types of Fabric Produced On a Dobby Loom?

A dobby loom can be used to produce the following types of fabric as the weaving companies in Kolkata do.

This is a type of fabric made on a dobby loom out of linen that has a diamond shape that resembles a bird’s eye. This material can be used to make men’s suits and is a little heavier as it is textured.

This fabric produces a moss-like effect, that keeps you cool in summer and warm in winter. It also flows well.

Below are some of the properties of dobby weave:

Hence, since there is good flexibility, there is also good drape. This means the material can be used to make flowy outfits.

With the dobby loom, one can create different patterns, in fact, one can create hundreds of different patterns. Since the patterns are small and simple, and not complicated like the jacquard weave, they can be used to make several quirky and fun elements in clothes. Although similar patterns can be made with other types of plain and twill weaves, the dobby weave is unique in that it produced texture.

The dobby part, that is, the instrument or the part of the loom that is responsible for making the dobby weave, cannot create complicated designs and textures. It can create small geometric shapes and similar small designs.

Typically, one can replicate the same patterns on a plain weave fabric as well. So, what makes the dobby weave so special? The dobby weave can encapsulate texture into the pattern rather than leaving the weave plain. This means you can have small bumps on the fabric.

Since the dobby weave is pretty heavy, the material is resistant to creasing. Especially synthetic dobby weaves have a low creasing quality.

There is a slight stretch in the dobby weave, it makes the pattern good for shirts, dresses and other outerwear.

The weave produces small geometric patterns, rather than complicated floral patterns for which the Jacquard weave is famous.

There are many applications of the cloth produced from the dobby weave. It can be used to make suits, dresses, bags, and other applications.

That was all to know about the Dobby weave, from weaving machine manufacturers Golden Elegance. If you want to purchase a Dobby loom do get in touch with us today!